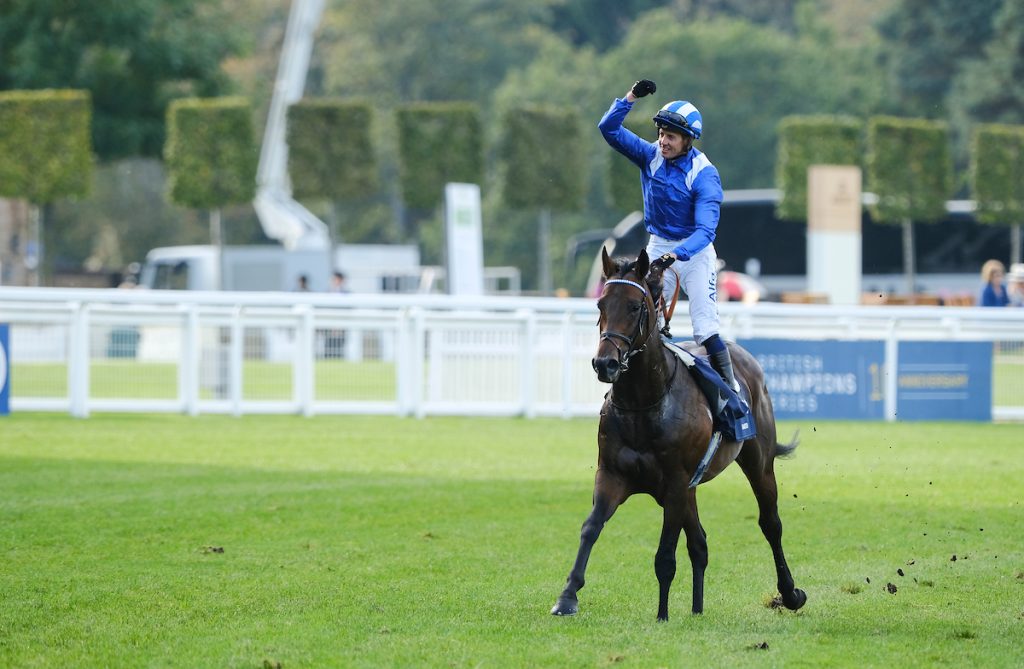 Baaeed proved he was the real deal when maintaining his unbeaten record for trainer William Haggas in the G1 Queen Elizabeth II Stakes (sponsored by QIPCO).

Billed as one of the best mile contests staged in recent years, the race did not disappoint as the Shadwell-owned winner held off five-time G1 scorer Palace Pier (6/4 fav) by a neck in a thrilling finish.

Five-year-old mare Lady Bowthorpe (40/1) ran a fantastic race to take third, beaten a length and a quarter, in what would be her final start before retirement.

“Oli Bell [presenter] just said to me, ‘at the start of the season, could you believe you would be standing here?’ What a silly question,” said Haggas, referring to his own amazement at what Baaeed has achieved this year.

“He’s done it, he’s won today. I think Jim’s words were that he coped with the ground, rather than loved it, and he’s beaten the best miler in Europe. What can you say? I’m thrilled to bits, shaking a lot.

Crowley said: “I think Baaeed could be a world champion. He’s just a beast, he keeps getting better.

“It was magical. I think people forget he’s come such a long way in a short space of time. It’s a great buzz to ride a horse that good.

“He was a little bit fresh in my hands because I didn’t have any cover, but he was really tough. It was a great race. I thought the first couple of furlongs were sensible enough, then from four down the pace was just relentless, which I thought really suited my lad.

“I’m pretty sure he would stay further if he had to. He’s got a great mind, there doesn’t seem to be any chinks in his armour. He travels so well, the stronger they go in a race the better for him. He’s got a very good turn of foot as well.

“William has done a fantastic job with him. He probably wasn’t 100% going into France and he got the job done, so it was nice to bring him here in tip top condition today.

“The ground was a bit slow for him and on quicker ground I think he would pick up better, but he’s a proper champion.

“I know Sheikh Hamdan will be looking down, smiling, and I owe him everything. He gave me this opportunity, he chose me to be his jockey and although he’s not here to see it, it’s nice to be able to repay him.”

Angus Gold, Shadwell’s racing manager, said: “Sheikh Hamdan would have loved this. It is a great day for the team and his family as he marks his legacy the year he died.

“Two Group One winners – one is enough but to have two on the big day is very special. Baaeed has shown so much. He had never beaten a horse of Palace Pier’s class before. No disrespect to his previous opponents. It is just very exciting and what a fantastic horse race.

“Considering Baaeed only started his career in June and we’re now standing here as a Group One against the best milers in Europe – it is very exciting.

“It was so exciting to see those two punching away at the end of the year. Baaeed had a proper fight on his hands and he proved up for it. I’m amazed how much speed he has. He stays and has a fantastic attitude.

“This is a stallion making race, which is very important the operation, Sheikha Hissa and her family going forward. That’s important for them for the breeding – it’s also great to have a filly [Eshaada] winning a Group One too.

“The plan always was to [see him run again next year]. I imagined he would be better over a mile and a quarter, but I’m eating my own words now. We’ll see what the family want to do. He hasn’t had a hard life so far and he has done what has been asked of him the whole way through and I can’t see why he wouldn’t go on next year. He’s done everything we could possibly ask him. We need him as a stallion, and he doesn’t have to prove himself by going there [Breeders Cup].”

“Sheikh Hamdan’s family are very keen to take it on – Sheikha Hissa is very keen. Obviously, it was a huge operation and I think they just felt we needed to trim it, which is perfectly understandable. We have a lot of horses in the sales over the next six weeks and we’ll see what we’re left with. We’ll hope to keep the best ones and we’ll have some yearlings to come into training next year. Compared to most owners, it would be fairly sizeable.”

William Haggas on Baaeed: “I need to watch it again because I was sort of only half watching and listening to it but to be champion miler on ground which Jim thought he coped with but no more.

“I thought he travelled very well and won. He’s very good, isn’t he? He always worked nicely and he’s always had speed.

“I believe he will stay in training, but he’s finished for the year now, he’s done all he needs to do. I don’t know whether he’ll stay a mile and a quarter, but he may well do.”

John Gosden said of runner-up Palace Pier: “Frankie said it was a slowly run race and I think if he rode it again he would have committed sooner rather than spending his time looking round. I think he should have committed earlier. This horse stays a mile well.

“The winner is a nice horse but ridden again I think we would have been a little bolder.

“It’s likely that Palace Pier will go to stud now. He’s a fabulous horse, is good-looking, has run with consistency in Group One races throughout his career and I think he will be an exciting horse to go to stud.”