Creative a Force to be reckoned with in Sprint 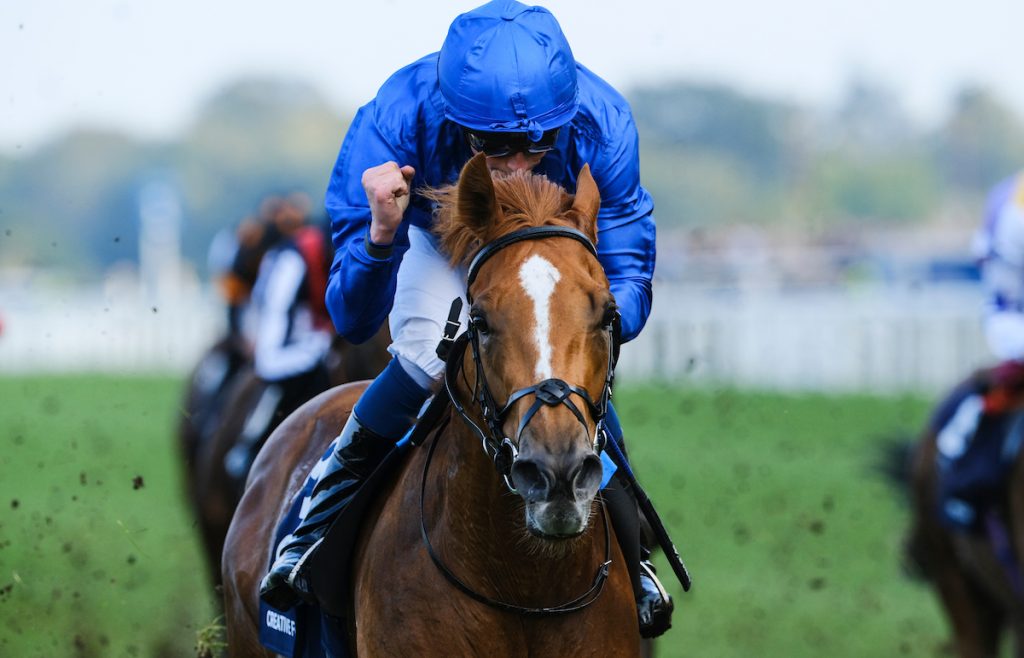 The Godolphin-owned three-year-old was always travelling well under William Buick, slip-streaming the pace-setting 2020 winner Glen Shiel before attacking a furlong from home.

The son of Dubawi, sent off an 11/2 chance, had a length to spare over Glen Shiel (22/1) at the line, who battled bravely for Hollie Doyle in first-time blinkers. Minzaal took third, beaten a further length at odds of 16/1. Art Power was sent off the 3/1 favourite and ran on for fourth.

This success moved Buick to within two winners of Oisin Murphy in the race to be crowned Champion Jockey.

Appleby said: “I was confident with this horse after Haydock. James Doyle felt he was a sprinter earlier this season, and the ground was too fast for him at Haydock.

“I’m delighted for the horse because he has been on the go. He was out at the Craven Meeting and rose through the ranks and came here to win the Jersey Stakes at Royal Ascot.

“Sprinting at this level, we’ve been lucky with the likes of Blue Point, and this guy can travel for fun. William was confident riding him and he has won over seven furlongs here, so he wasn’t going to stop. I’m delighted, it’s a great team result, it’s been a great season and this lad deserves it.

“This was my first runner at Champions Day. It’s a fantastic crowd, and the sun is shining down. It’s soft ground, but that is what we expect at this time of year. It is not dead ground; they are going through it.

“Creative Force is a typical Dubawi who should get better with age. The sprint division is there for someone to take the mantle next year and we’ve been looking for a new star sprinter since Blue Point was retired, so hopefully this horse can be a fun horse for the next year or two. There’s a hole there to be filled and I think he is a young enough horse to do that.”

Regarding Buick’s title challenge, Appleby said: “Tony Hind [agent] has been looking after him and sends him all round the country. I think it’s something that William himself will say he has enjoyed. It’s all very well riding these good horses at the big meetings, but he’s been mucking it out round the smaller tracks.

“Success breeds success and you can’t beat having winners. So therefore, William riding more has given him more opportunity to ride more winners and I think we’ve seen a better rider. He has always been a rider at the top of his game, but now he’s riding so many of these horses and so many different types of horses, I’m not going to try and hide from it – I noticed at the back end of last year his style of riding was changing, hungry. And we’ve seen it this year.

“Win, lose or draw, William isn’t going to walk away deflated from what he’s achieved this year. He has that character that he will go forward again and do the same next year, I’m sure. For me, he’s a huge part of the team and the more winners he rides, the happier I am!

“It’s a sporting industry and the last thing you want is someone who is sat on the bench for the week and then coming out on the weekend. It’s alright when you do it at a certain level of your career, but William is too young to be doing that just yet.”

Buick said: “Creative Force really did deserve it. Obviously, he won the Jersey Stakes here and he goes through that ground which is a big help.

“The race worked out perfectly today – we had a nice draw and I liked the look of it. It worked out how I wanted it to and he was in good form going into it.

“He certainly deserved it, but we thought it was a good chance for him to show his best today.

“There were a lot of runners, they all turned up, but he travelled into it very smoothly and it was a case of just waiting with him a little bit.

“He stumbled out of the stalls and the ground was very fast at Haydock but if you stumble out of the stalls in a six-furlong Group 1, then it’s game over but he did get himself back into it and he ran well, considering.”

Archie Watson said of Glen Shiel: “I am delighted. He does come alive here. That’s his second Group One second place here this year. The blinkers worked first time, they really lit him up. He jumped and travelled very well. Hollie was delighted with him. He quickened away and just found one very good horse of Charlie’s to beat him. He’s just a dream for the owners to have and a dream for us to have.”

Hollie Doyle added: “It was another brilliant run from Glen Shiel. He is such a credit to connections.”