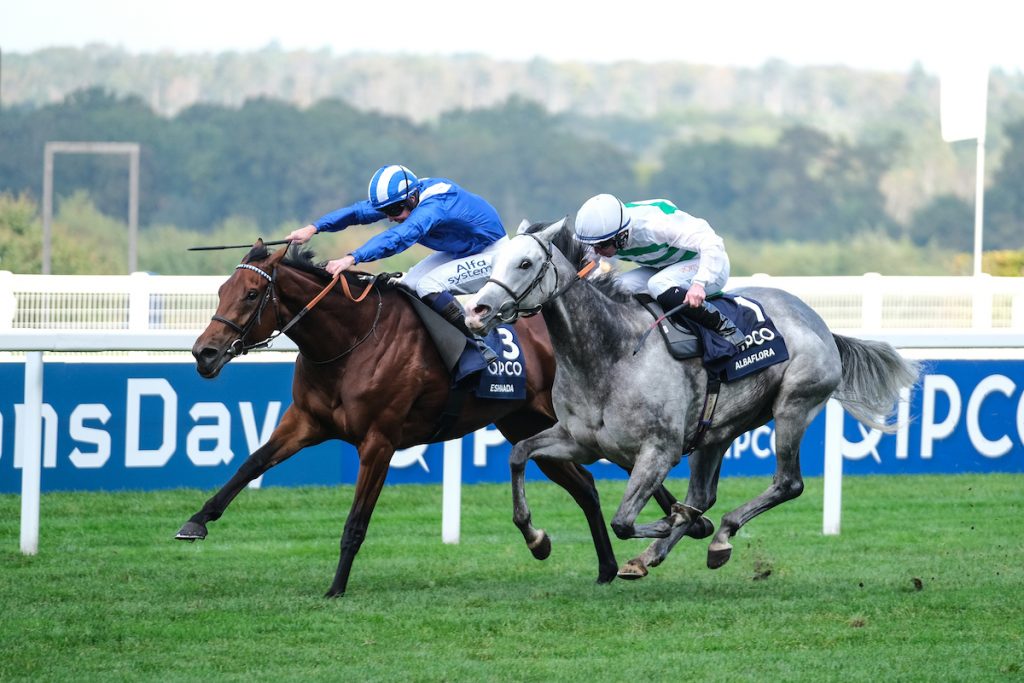 The Shadwell homebred ran well over the course and distance when runner-up in the G2 Ribblesdale Stakes at Royal Ascot in June but had disappointed subsequently in the G1 Yorkshire Oaks.

Eshaada was back on song today and showed a tremendous attitude in the closing stages, prevailing by a short-head after a ding-dong battle with runner-up Albaflora (3/1). Three-time Group 1 winner Snowfall was sent off the 8/11 market leader but could only manage third, beaten three and a half lengths.

Crowley and Varian were both notching a second career win on QIPCO British Champions Day.

Varian said: “The Ribblesdale form had worked out well with the winner of that [Loving Dream] landing a Group One in France.

“Eshaada loves cut in the ground and she’s got track form. She is a class filly and I thought she looked a touch overpriced coming into the race. She’s ran a great race and we’re delighted.

“Everything went right really; she broke and travelled well, always had a good position and she kicked in the straight but had to be very tough in the final two furlongs where she stuck her neck out and was really game.

“I think a discussion will be had with Shadwell. She is a great, big scopey filly and I think her best days are ahead of her. I would like to keep her in training.

“She doesn’t look by a sprinter; she is a great big leggy filly. Muhaarar’s are starting to get more than sprint distances.

“We’ve got a brilliant team at home who are doing a great job and we’ve got lots of loyal and great owners.”

Crowley said: “I had a very willing partner; she tried very hard and loves that ground.

“She was unlucky here at Royal Ascot, I just got a bit far back on her, but we had the perfect trip round today and she toughed it out.

“Roger Varian is a class trainer isn’t he. He’s planned this race for her, I’m sure there were other options in France or what have you, but we knew she liked cut in the ground and this was always the plan.”

Ralph Beckett, trainer of Albaflora, said: “It was just a very good horserace, wasn’t it? I’m thrilled with her, but disappointed to run so well and not win!

“We were beaten by a better filly on the day, it’s as simple as that. She’s a good filly and it was a great effort by both of them.”

Aidan O’Brien said of Snowfall: “Snowfall ran OK. She ran an OK race, obviously you would be disappointed she didn’t win.

“She’s had plenty of racing and it was a steadily enough run race. They quickened and she followed them, but she just didn’t get to them.

“Ryan said he would have preferred the pace to be a bit stronger early. Snowfall was slow away and didn’t want to come out and around them. There you go – that’s the way it is.

“We haven’t said anything really [about next year]. We’ll see how she is, but that is probably it this year.”