Murphy on the cusp of third Champion Jockey title 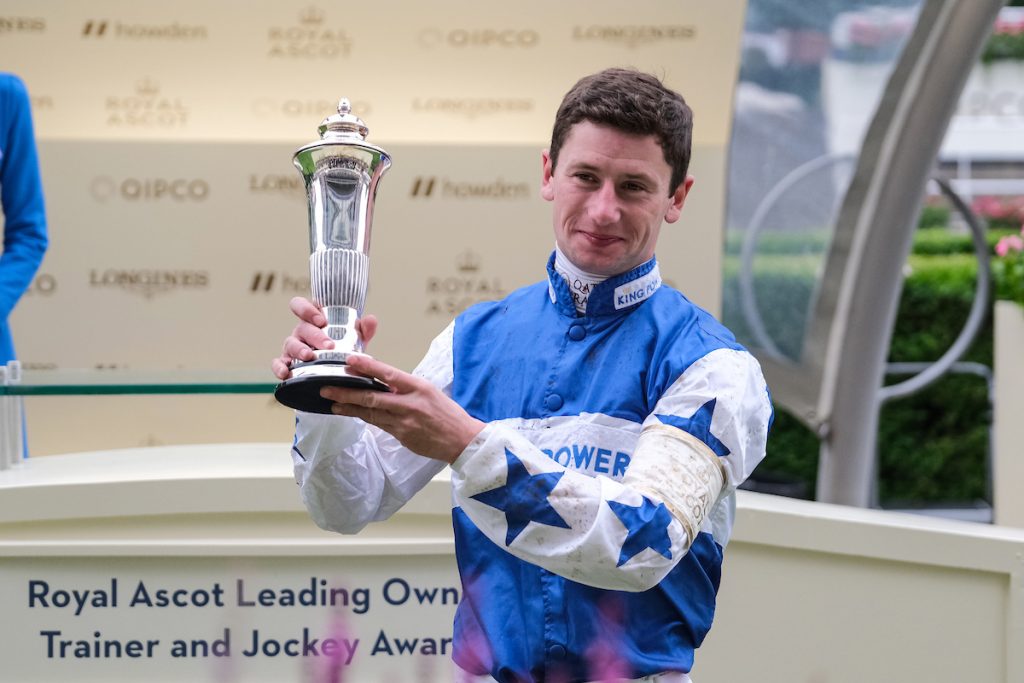 The race to be crowned Britain’s Champion Jockey comes down to the final day of the championship season, with defending champion Oisin Murphy (153 winners) holding what appears to be a decisive lead over William Buick (150 winners).

Murphy, who took the honours in 2019 and 2020, looked set for a comfortable defence of his title entering the final weeks of the season, only for Buick to rapidly close the deficit in the last 10 days.

In the event of a tie, there is no countback, and the title will be shared. This last happened in 2007 with Seb Sanders and Jamie Spencer.

The presentation will take place after the concluding Balmoral Handicap (sponsored by QIPCO).

Background: Nephew of former jump jockey Jim Culloty, who won three Cheltenham Gold Cups on Best Mate and trained the 2014 winner Lord Windermere. Murphy began riding at the age of four and competed in pony races and show jumping. Joined Culloty’s Cork yard at the age of 13 before teaming up with trainer Tommy Stack two years later. Started riding out for Ireland’s champion Flat trainer Aidan O’Brien at 16 and then moved to England as an apprentice for Andrew Balding in October 2012. First win came aboard Imperial Glance at Salisbury on June 16, 2013. Capped 2013 with a memorable four-timer on Ayr Gold Cup day, including landing the feature race on Highland Colori. Had a three-month spell with leading Australian trainer Danny O’Brien in 2013/2014 and gained 13 successes. Appointed second jockey behind Andrea Atzeni to Qatar Racing Ltd ahead of 2015 Flat season and became first jockey to the organisation when Atzeni returned to trainer Roger Varian in late 2015. First Royal Ascot success came aboard Benbatl in the 2017 G3 Hampton Court Stakes.

Background: Fluent in Norwegian, Danish and German as well as English. Hails from a family with lots of equestrian background. His mother Maria became a showjumper and dressage rider, while his father Walter enjoyed a long career as a jockey, being champion jockey eight times in Denmark and once in Norway. William rode out for his father in Germany and for Norwegian champion trainer Wido Neuroth. During the holidays, he would travel over to Britain to ride work for Reg Hollinshead, Marcus Tregoning and Andrew Balding. Returned to Balding’s yard at Kingsclere, Berkshire, to become an apprentice jockey after leaving school at the age of 16. First ride came in August 2006, and his first victory came on Bank On Benny at Salisbury on September 27. Following a working holiday in Florida, USA, he returned to Britain at the start of 2007 and soon earned a reputation as one of the country’s most exciting apprentices. Gained a first Royal Ascot success on Dark Missile in the Wokingham Handicap in June 2007, and first Group victory on Buccellati in the G3 St Simon Stakes at Newbury in October 2008. Ended 2008 as joint-Champion Apprentice and was appointed stable jockey to John Gosden in January 2010, despite never having ridden for the Newmarket trainer. Announced as a Godolphin retained jockey on November 9, 2014 and rides as first jockey to Charlie Appleby.

Brando will join another hugely popular sprinter at the top of the appearance charts for QIPCO British Champions Day when he makes his sixth consecutive start at the end of season highlight today.

Nine-year-old Brando finished third on his QIPCO British Champions Day debut in 2016 and continued his excellent record in the six-furlong contest last year when going down by a nose to Glen Shiel. He also finished sixth in 2017 and fourth in both 2018 and 2019.

Tom Eaves, who has partnered the Kevin Ryan-trained veteran on four of those starts, is set to take the ride again.

Amy Ryan, daughter of Kevin Ryan, told the Nick Luck Daily podcast on Friday: “Brando is a bit of a legend, isn’t he?

“I was at Nottingham on Thursday and a member of the public said to me ‘I love that horse, is he going to run on Saturday?’ and he had followed him since he was a two-year-old.

“Brando really deserves to win this race. He loves the track, although ideally a bit more rain would have been nice as the softer ground the better for him. He is normally a huge price, but he always runs his race, and it might be worth backing him each-way.”

Elsewhere on the card, Stradivarius is due to make a fifth straight start in the QIPCO British Champions Long Distance Cup, while Lord Glitters will also be having his fifth appearance on the day in the G1 Queen Elizabeth II Stakes (Sponsored By QIPCO).

Oh This Is Us