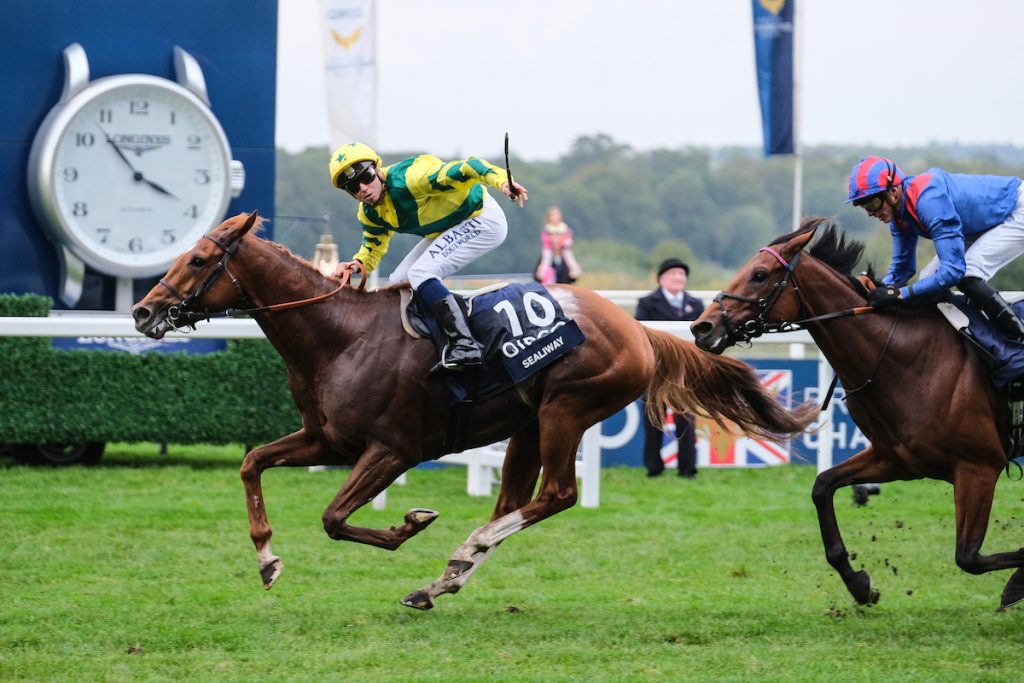 It was a victory for France as Sealiway beat the best of the home team to claim the G1 QIPCO Champion Stakes – the 10-furlong showpiece of QIPCO British Champions Day.

The contest was billed as a head-to-head between 13/8 favourite Mishriff and Derby and King George VI & Queen Elizabeth QIPCO Stakes winner Adayar (5/2), but neither could land a blow in the closing stages.

Sealiway (12/1) was too strong for Dubai Honour (6/1), repelling the runner-up by three-quarters of a length. Irish raider Mac Swiney outran odds of 40/1 to take third, a further length and a half behind.

Sealiway was ridden by Mickael Barzalona for trainer Cedric Rossi, the combination tasting QIPCO British Champions Day glory for the first time on the biggest stage of all.

Barzalona, who memorably won the Derby as a teenager on Pour Moi in 2011, said: “It’s great to be back in the big time and be with this horse since the beginning. He deserved to prove his talent like he did today.

“I didn’t sit on him on Arc day, but the team were very confident. They said he was in good form and that he had improved a lot since the Arc run, so although it was a tough race, they were pretty confident.

“Pour Moi’s Derby is something that will always be in my mind, but I’m very happy for today and hopefully there will be plenty more.”

Cedric Rossi, winning trainer, said via translator: “He recovered really well from the Arc because that was a mid-seasonal reappearance and we came here with the thoughts of winning it.

“The Arc did him the world of good and he was ready for this race. All they needed to do was to keep him ticking over.

William Haggas said of the runner-up: “Dubai Honour was a little bit unfortunate because he’s a hold up horse drawn in stall 10. Adayar missed the break and just as James [Doyle] was trying to get him in, Adayar went hurtling past him and set him alight a bit.

“No excuse, we were quite far back but that’s the way he needs to be ridden. He came with what looked like a winning run, but the other horse outstayed him.

“He’s another that has made great progress. I was thinking that the Hong Kong Cup might suit him. He would enjoy that long straight and seems to run well right handed. I don’t know about Australia for him yet.”

Dubai Honour’s rider James Doyle said: “Fantastic, great run. We had a bad draw, so we had to sit and suffer, but they went a nice pace and it set up for him to close, the winner just found more.”

Charlie Appleby said of Adayar: “Will [Buick] said it was the ground. Adayar was always doing enough. He was always just doing too much really and it paid up the straight.

“Will just said his exertions paid towards the end. At the end of the day we made the decision to come here and maybe it was a tougher race than we thought in the Arc.

“We’ll put him away for the winter and we’ve got a nice horse for next year. We know we can step him back up to 12 furlongs too.

“We know how to set our stall out next year. Today there was not going to be any natural pace and he was just over-racing and it paid towards the end.”

Mishriff’s rider David Egan said: “He is a better horse on better ground.”