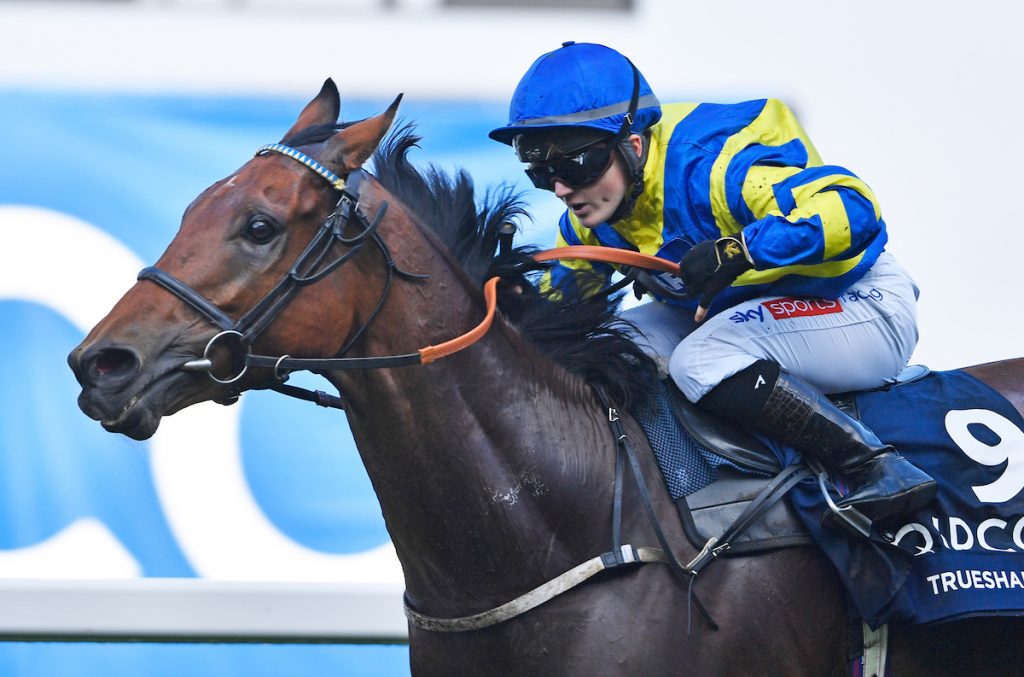 It was Trueshan again in the G2 QIPCO British Champions Long Distance Cup, as the Hollie Doyle-ridden staying star followed up his 2020 win in the two-mile contest.

In what was a thrilling opener to QIPCO British Champions Day, the even-money favourite was always in a position to strike for Doyle, and the combination made a decisive move as the field swung into the Ascot straight.

Three-time Gold Cup winner Stradivarius (7/2), ridden by Frankie Dettori, tried but failed to reel in the Alan King-trained victor, eventually fading into third place. Tashkhan outran odds of 50/1 to take second, beaten a length and a half by the winner.

Doyle said: “It’s an amazing feeling and all credit to Alan [King] and the owners for putting me back on.

“The pressure was really on today to deliver given the great ride James [Doyle] gave him in France, so I’m glad it went well.

“It was a bit of a nightmare really. He jumped nicely, I got a nice position early on and he switched off. At halfway he came to life, put the brakes on and raced rather keenly but that’s just the way he is.

“I could feel Frankie breathing down my neck five down and I was wider than I wanted to be turning in, but I had to make my move.

“He’s so brave, to back up like he’s done today, it’s just amazing. I would love to try and live the dream again next year and hopefully he’ll be a stronger horse.”

Alan King said: “I haven’t been this nervous for a long time. I was just a bit nervous that it had only been two weeks since France. He was quite a handful to saddle today, so we got away with it.

“I made a mistake of watching the race out the front, so I missed most of it until they turned in. He had to be very tough today and Stradivarius ran another great race, the old boy.

“Hollie has ridden Trueshan most of the way through and he is her ride. It was unfortunate she couldn’t ride in France and James Doyle did a great job, but he knew she was coming back on today.

“Everyone has said I’ve been too cautious with this horse, but I’ve only taken this horse out when it has been rock hard ground. I will run him on good ground, but not good to firm.

“Let’s hope we get a wet Royal Ascot as it would be lovely to run him in the Gold Cup.

“We’ll duck and dive and if he keeps doing as well as he doing at the minute then we’ll be happy.

“It’s been a long time since I’ve had a Grade One winner over jumps, so we better kick on this winter.”

Ben Robinson, who rode the runner-up, said: “Tashkhan ran really good. He was a horse coming into the race at a big price. He ran well out in Paris two weekends ago. He’s a horse for the future, he’s only three years old. Whatever he does now, he will only improve.

“Ryan [Moore] got it nice and easy in front. I thought we went a nice gallop going into the top bend and he managed to stack us up. We went steady downhill and around the bend. Trueshan was travelling better than me at the time, and he tried to keep me in there, but he’s a tough cookie and he battled all the way to the line.”

Tashkhan’s trainer Brian Ellison said: “It was fantastic. Tashkhan is only three and has improved with every run this year. He ran a mighty race in Longchamp and came here today thinking we could be in the first four. He has just run a blinder. Trueshan is a brilliant horse.

“We bought Tashkan to go jumping, but that is not happening and he’ll run in all the best races next year.”

Stradivarius’ joint-trainer John Gosden said: “It was a horrible trip. It all went wrong but that is life and I don’t want to go into any detail on it, but they rode to beat him a little bit.

“Stradivarius has run a great race, considering the ground. He could have done without it going softer this morning with another two and a half millimetres of rain.

“He seems fine after the race and no decision will be made on next year until next week. In other words, we want to see how the horse is in the next few days at home and he will tell us how to play it.

“Stradivarius has run a great race with a horrible trip. He is a little bit more of the Federer blend in a sense. The horse’s enthusiasm is there in his work and has been great. He was not blowing coming in, I think the tactics of the race and slower ground – the slog is not his scene.

“They do go finding him in a race. One day they box him in and the next day they push him out. You look at the Ascot Gold Cup and today and other guys are riding him. I don’t want to go any further than that.

“That is Bjorn’s decision [retirement or continue next year], but I will tell him how the horse is. Funnily enough the horse is a very expressive character. He will tell us.”

His jockey Frankie Dettori added: “It was a disgrace. The kid [Dylan Browne McMonagle on Baron Samedi] in front of me did everything possible to get me beat.”